Shiawassee voters give up ‘bellwether’ status with Trump selection

Manke refused to close and continued to cut hair. He fought Whitmer and Attorney General Dana Nessel in court every step of the way. His case became national, even international news. Manke claimed that Whitmer’s actions were unconstitutional. Evidently he was right — he won his own case in several different judicial venues, and ultimately the Michigan Supreme Court ruled that what Whitmer had done was illegal. Manke never shut his doors.

Manke must have been on to something. Owosso is the biggest city in Shiawassee County, which has long been a small, marginally Republican enclave sandwiched between Lansing and Flint. This year, however, the county swung heavily toward President Donald Trump in his losing re-election battle with Democratic nominee Joe Biden.

In fact, Shiawassee Co. was always “marginal” enough that it has been one of the state’s most reliable “bellwethers” in picking state and national election outcomes, as noted by The Owosso Argus-Press in an insightful article last month. Here’s what the Argus-Press said:

“The 2020 election for Shiawassee County was a rare miss.

“Since 1976, Shiawassee County residents had correctly picked the presidential winner in every election, and had only missed twice overall since 1952. However, former Vice President Joe Biden’s victory over President Donald Trump earlier this month was a unusual blemish on the county’s record, as residents overwhelmingly voted for the incumbent Trump, 58.7 percent to 38.9 percent.

“Shiawassee County Commissioner John Plowman, who is the vice chairman of the county Republican Party, said he’s been noticing a red-ward shift locally for quite some time — and he believes it’s only going to get redder.

“We’re the leading edge of what’s coming,” Plowman said. “Shiawassee County is a pretty good county right now to get a job in. I’m starting to see that the younger under-40 (population), they are not voting for the Democrats. I know they talk about college age — you come out of college, you come out of Michigan and they’re all Democrats — well, I think that could be true somewhat. But I know none of my children, none of my nieces and nephews (are Democrats) — a lot of them grew up in Democrat homes. And they vote Republican. Even the dog does.”

“That was likely aided in part by historically high turnout and easier ballot access. Turnout in Shiawassee County in 2016 was 66.32 percent; that increased to 70.98 percent this year. Michigan also adopted no-reason absentee voting in the 2018 mid-terms, leading to a record 5.5 million people voting this cycle.

“Plowman attributes the president’s performance with Shiawassee voters to what he said were successful programs.

” “Changing trade deals so jobs come home or stay here; looking at (the North American Free Trade Agreement) and seeing what NAFTA did to Michigan … it really hammered Michigan,” Plowman said. “I mean, take a town like Perry, (it used to be full) of Main Street businesses, then NAFTA came about and almost 10 years later almost everything was gone.

” “I think that the opportunities here are tremendously better because of the policies that Trump really pushed hard for,” Plowman continued, citing better trade deals, and his “America first” agenda.

“However, Biden — and Clinton, for that matter — did not win any of the county’s 16 townships, or the cities of Owosso, Corunna, Durand, Perry or Laingsburg.

“Drain Comissioner Tony Newman, one of just two county-wide elected Democrats in Shiawassee County (Road Commissioner John Michalec is the other), wasn’t sure why Biden was unable to do better.

” “To me it just doesn’t make a lot of sense, but the only thing I can figure is maybe the people thought Trump did do a (lot of) good,” Newman said. “From what my understanding is, the amount of Democrats and the amount of Republicans in the county is pretty close.” 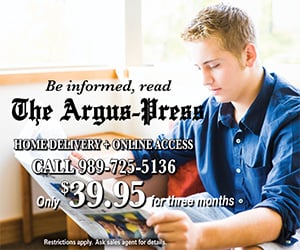 “While Shiawassee County remained red, Michigan as a whole shifted back to blue in 2020. The state had voted Democratic presidentially every cycle since 1988 until Trump flipped the state in 2016 by just 10,704 votes.

“On Monday, Michigan’s Board of Canvassers certified a 154,188-vote victory for Biden with a 3-0 vote — one canvasser abstained. Biden was buoyed by a surge in the cities and suburbs — he won just 11 of Michigan’s 83 counties, but roughly 55 percent of Michigan’s population lives in counties won by the president-elect.

“Shiawassee County, however, was not alone in choosing the loser this cycle. Of the 17 counties that had a perfect record picking presidential winners between 1980 and 2016, all but one voted to reelect Trump, who lost to Biden in both the national popular vote and several key battleground states. Clallam County in Washington was the only county not to have its perfect record blemished in 2020, backing Biden 24,721 (50.18 percent) to 23,062 (46.81 percent) earlier this month.

” “It used to be — and it still is the case — that counties that tend to fluctuate respond more to things that have more sort of a blue-collar profile,” said Corwin D. Schmidt, an associate professor of political science at Michigan State University who studies Michigan politics. “The lower the income of the area, the more responsive and more likely they are to fluctuate — they’re not as loyal to one party or the other. Urban areas tend to be more loyal to Democrats and certain areas like west Michigan are more loyal to Republicans.

“Schmidt said while Trump was able to make some inroads among Hispanics and African Americans, Biden offset it in Michigan by doing better in traditionally Republican areas like Kent, Ottawa and Oakland counties.

“The former vice president also flipped Kent County, the home of Grand Rapids. Kent County has only voted Democratic six times since 1884 and backed Trump by just under 5,000 votes four years ago. This year, Biden beat Trump 187,915 to 165,741 in Kent.

” “He gained on Trump in Ottawa County, Kent County and Oakland County and those are these more upper-class (suburban) communities,” Schmidt said.

“Newman, who was first elected in 2008 and has ran unopposed the last two elections, said Democrats must do a better job of honing their message to win more positions.