You are here: Home / Uncategorized / Snyder Still Has One of Lowest Job Ratings Among Nation’s Governors
By Cameron Easley
Morning Consult
October 31, 2017

Michigan Gov. Rick Snyder is tied for fourth-lowest job rating among the nation’s 50 governors, according to a just-released national survey.

Snyder is one of only 10 governors whose ratings are “under water,” meaning they are more unfavorable than favorable — 37% of Michiganders approve of the job Snyder is doing, but 50% disapprove, with some 13% undecided, refusing to answer or claiming they don’t know.

Still, that’s an improvement for the Republican governor. For most of the past two years, Snyder has had ratings as low as the 33% approve/61% disapprove he experienced in the spring of last year.

Elsewhere, Republican governors are doing well. The top 10 most popular are all Republicans, led by Charlie Baker of Massachusetts and Larry Hogan, who preside over strongly Democratic states. On the other hand, the most unpopular governor in the entire country is Republican Chris Christie of New Jersey, who lags in at 18% approve/77% disapprove, with the rest U/RtA/DK.

The latest installment of Morning Consult’s Governor Approval Rankings — a survey of more than 255,000 registered voters nationwide conducted online from July 1 to Sept. 30 — features a shuffling at the top and bottom, along with a debutant on the list and a new entrant in the highest ranks. Margins of error vary by state; see table below. Full methodology available here.

New Hampshire Gov. Chris Sununu makes his debut in the top 10, joining nine other Republicans as the most popular governors in the country. Govs. Charlie Baker of Massachusetts and Larry Hogan of Maryland, two Republicans in deep blue states, remain entrenched at the top of the rankings ahead of their 2018 re-election bids. Meanwhile, Govs. Phil Scott of Vermont and Brian Sandoval of Nevada, also in the top 10, round out the coterie of most popular Republicans who are leading states carried by Democratic nominee Hillary Clinton during the 2016 presidential election.

With just a few months left in office, New Jersey Gov. Chris Christie (R) retains his spot at the bottom of the rankings, with 77 percent of Garden State voters disapproving of his job performance — a record low since Morning Consult began tracking public sentiment on governors in 2016. Two other governors, Kansas’ Sam Brownback (R) and Connecticut’s Dan Malloy (D), have cracked the 70s on disapproval before — and aren’t expected to be in office much longer. Brownback is awaiting Senate confirmation to lead the State Department’s Office of International Religious Freedom, and Malloy announced in April he will not seek a third term in 2018. They join Christie in the bottom three. 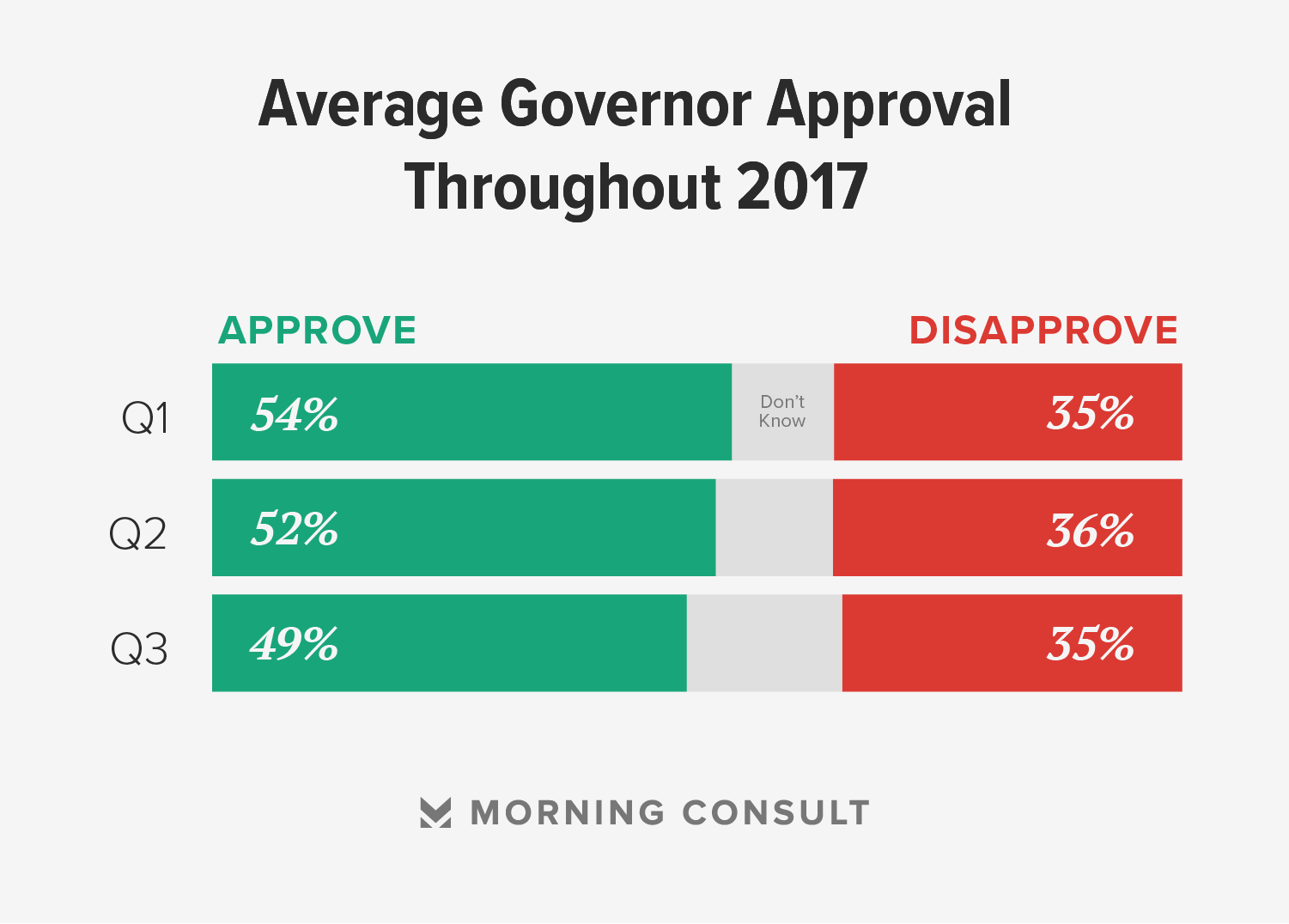 First-term West Virginia Gov. Jim Justice tops the list of negative net swings in approval for the third quarter of 2017 following his ballyhooed announcement — complete with an appearance by President Donald Trump — that he was leaving the Democratic Party to become a Republican. The move from the left to the right side of the aisle has thus far brought all of the political risks without any of the benefits, polling shows. The billionaire businessman hemorrhaged support from Democrats and independents while suffering GOP defections at a lower rate, resulting in a net drop of 22 points. That puts him 5 points underwater: 41 percent of Mountaineers approve of him, while 46 percent disapprove.

Republican Gov. Bruce Rauner of Illinois, who continues to clash with Democrats in the Legislature over budget issues and has overseen a period of staff upheaval, is still sliding with voters ahead of his re-election bid next year. He experienced a net loss of 16 points, with 30 percent approving of his job performance and 55 percent disapproving.

While there were no large swings in net gains made by any governors during the third quarter, a few made small improvements, including GOP Govs. Asa Hutchinson of Arkansas (up 7 points), Rick Scott of Florida (5 points), Scott Walker of Wisconsin (4 points) and Eric Holcomb of Indiana (3 points).

It was not a banner quarter for governors considered potential 2020 presidential candidates — almost all experienced net drops in approval ratings, though they remain popular among constituents. On the Democratic side were New York’s Andrew Cuomo (down 8 points), Washington’s Jay Inslee (down 6 points), Virginia’s Terry McAuliffe (down 6 points), along with North Carolina’s Roy Cooper and Colorado’s John Hickenlooper (who each lost 3 points). Montana Gov. Steve Bullock (D) saw no net change in his approval rating.

Gov. Kim Reynolds (R) assumed office on May 24 after serving as the state’s lieutenant governor since 2011. She replaced former Gov. Terry Branstad, who became U.S. ambassador to China that month. Reynolds is the most unknown governor among constituents in Morning Consult’s rankings. Three in 10 Iowan voters said they didn’t know or had no opinion about Reynolds, but she is off to a solid start, with an approval rating of 45 percent and a disapproval rating of 27 percent.