You are here: Home / Uncategorized / HOW LIBERALS SEE BIDEN’S CHANCES IN MICHIGAN

What gives Biden an edge in Michigan

(CNN) There’s no point dancing around it: For a lot of Michigan liberals, the most important thing any presidential candidate can do is not be Donald Trump.

Trump’s 10,704-vote victory here helped him secure the presidency in 2016. It was a difficult pill to swallow for liberal voters in this state, reliably Democratic since 1992 — an outcome driven as much by unexpected support for Trump as by low Democratic turnout, particularly in overwhelmingly blue Detroit. 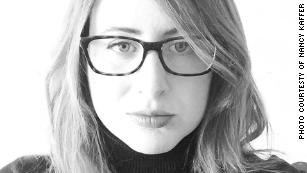 Statewide, Trump is down nearly nine points against former Vice President Joe Biden, according to NBC/Marist latest poll. Notably, independent voters are aligning overwhelmingly with Democrats, per an earlier NBC/Marist poll of Michiganders
Biden needs suburban women and independents and Obama voters who flipped in 2016.

Detroit is so heavily Democratic that the city’s legislative and congressional races are decided in party primaries.
And in 2016, 41,625 fewer Detroiters voted than in 2012.
Detroit’s population fell by an estimated 6% in the last decade, but that’s not the whole story. The March presidential primary offered a cautionary tale: As turnout soared across the state compared to 2016, it dropped about 2% (adjusted for population loss) in Detroit.
In any other year, Biden might not be the man for the job. The 2020 presidential election began with the most diverse, progressive field of candidates in American history; some Michigan liberals were dismayed as Biden emerged as the frontrunner, a mainstream Democrat with a long history of political positions that don’t always look right in 2020.

This is a Democratic Party fractured in 2016 between the mainstream liberalism of nominee Hillary Clinton, and the progressive politics of US Sen. Bernie Sanders; against a growing social justice movement that believes the party isn’t doing enough to advance the goals of equity and reform it espouses; and a growing dissatisfaction among some Black voters that decades of reliable support for Democratic candidates haven’t resulted in equitable policy.

But Biden won the March presidential primary with a decisive 52.9% of the vote, nearly 17 points ahead of Sanders, the next highest vote-getter — the same night Michigan reported its first Covid-19 cases.

And this is not any other year.

“This is a little like the last days of the World War I trenches in France. They can send poison tanks, mortar fire, and we can return fire, but we’re not going to take any territory and neither are they,” said Mark Grebner, an Ingham County commissioner and founder of Lansing, Michigan-based Practical Political Consulting, which tracks voters and voting trends in Michigan in an interview last month. “There is no middle ground.” 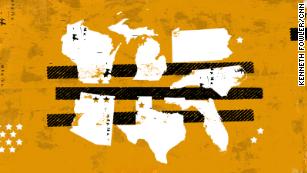 “I’m a realist, and I think liberals can be too idealistic around identifying the perfect candidate, not understanding that people can shift on their own, but it’s also up to voters to cause people to shift, based on our continued advocacy,” said Gaston, founder of equity consultancy Glidepath Strategies, in an interview earlier this month.

For Gaston, 44, the nominee and eventual president must address the nation’s twin pandemics: Covid-19 and police brutality. She wants a national, coordinated response to the ongoing pandemic, federal leadership and guidance around testing, and an independent Centers for Disease Control and Prevention that’s equipped to handle a pandemic, free of any political influence.

She wants to see the Justice in Policing Act passed and signed into law. She wants a compassionate immigration policy that offers a path to citizenship for undocumented immigrants living in this country and also recognizes the need for a more functional immigration system, as well as the urgency around safety for refugees. And she wants federal investment in early childhood education and universal childcare.

From Biden, she hears enough of what she needs. But she’s also a pragmatist.

“At the end of the day, those are campaign promises. For me, where my realism comes in, it’s not just what is a President Biden going to do in office,” said Gaston. “We have to have Democrats and liberals either in control of the US House and Senate, or we have to have concrete strategy to be able to flip people who are more moderate. That’s the sausage making.”

For Gaston, that’s manifest in Biden’s choice of running mate, US Sen. Kamala Harris, D-Calif. Harris, who is Black and South Asian, is the first mixed race woman at the top of a major party ticket.

“I think the Democratic Party does take Black voters for granted, and especially Black women voters. I think the push to ensure the vice presidential candidate was a Black woman was one of those moments where the rubber is hitting the road … celebrities, pundits came out and said, this needs to be a Black woman. If you’re serious about our votes, serious about our needs, you will pick a Black woman,” she says. In Harris, the party delivered.

It’s the same for Barbara Murray, 74, a former non-profit administrator liberal activist who split her time, before the pandemic, between Detroit and Cheboygan in northern Michigan.

“He’s the traditional Democratic candidate, he’s kind of old-fashioned, and yet he does have listening skills. When he needs to change his tune, it seems to me he does,” Murray said last week. “A lot of it is who he’s got around him, too, and my God, he picked her! Good for him.”

Murray wishes the environment were front and center in Biden’s campaign, but says even without that, there is still no contest.

“I don’t think we have any choice,” she said. “It’s true that it’s anybody but Trump, in a way, but he’s a candidate that’s more than Not Trump. He is a smart man, he’s made his errors in his political career, but he knows where they are.”

Record-breaking turnout in the 2018 midterms — also a gubernatorial election year in Michigan — and in the March presidential primary suggest liberal voters are determined to avoid a repeat of 2016. But those numbers look different outside the context of a party primary. Will liberal voters’ determination to defeat Trump stack up against conservatives bent on returning him to office? Will Democrats tuNancy Kaffer is a columnist and member of the editorial board at the Detroit Free Press. Her work has appeared in the Free Press, Politico and the Daily Beast. The views expressed in this commentary are her own. View more opinion on CNN.rned off by mainstream party politics turn out for Biden?

In a way, the intense polarization of 2020 offers a reprieve for Democrats struggling to put their party back together: For some voters, Biden’s more than Not Trump. For others, he’s exactly that. But as long as beating Trump is job one, there’s still time to recalibrate.

Nancy Kaffer is a columnist and member of the editorial board at the Detroit Free Press. Her work has appeared in the Free Press, Politico and the Daily Beast. The views expressed in this commentary are her own. View more opinion on CNN.