You are here: Home / Uncategorized / Campaign 2018: Are Changes Likely in Michigan Senate?

State Senate Democrats are buried in a minority so feeble (Republicans hold a 27-11 edge) that it’s hard to imagine it could get any worse. To be sure, everybody thought the same thing leading up to the 2014 general election, when the Senate GOP surprised us all by winning all the key contests and thereby extending its majority from what had been 26-12 during the previous four years.

Of course, most Senate Republicans were running for re-election two years ago, and that gave them an advantage against Democratic challengers. That won’t be the case in 2018, when a whopping 19 GOP senators — more than two thirds of their caucus — will be term-limited, meaning their seats will be open. By contrast, only seven Democrats are term-limited, none of them in districts the Republicans have a prayer of picking up.

That means Dems really are likely to make gains next year. The only question seems to be: how many? They would have to net eight seats to pull into a tie, nine for an absolute majority. That’s almost impossible to imagine, but if Democrats could whittle their deficit down to single digits that would be a huge accomplishment that would prevent the GOP from steam-rollering them in a veto override.

Following is a table broadly summarizing 2018 election prospects in all 38 state Senate districts.

In most cases, “solid” or “likely” or “lean” refers to the district itself, although in a few cases a particularly strong incumbent or dominant party candidate (or, conversely, a weak one on the other side) enhances his/her party’s chances of winning the seat. A district number in boldface rather than a name means that the sitting member isn’t running again (the incumbent’s name follows in parentheses). Democrats are in regular type; Republicans are in italics: 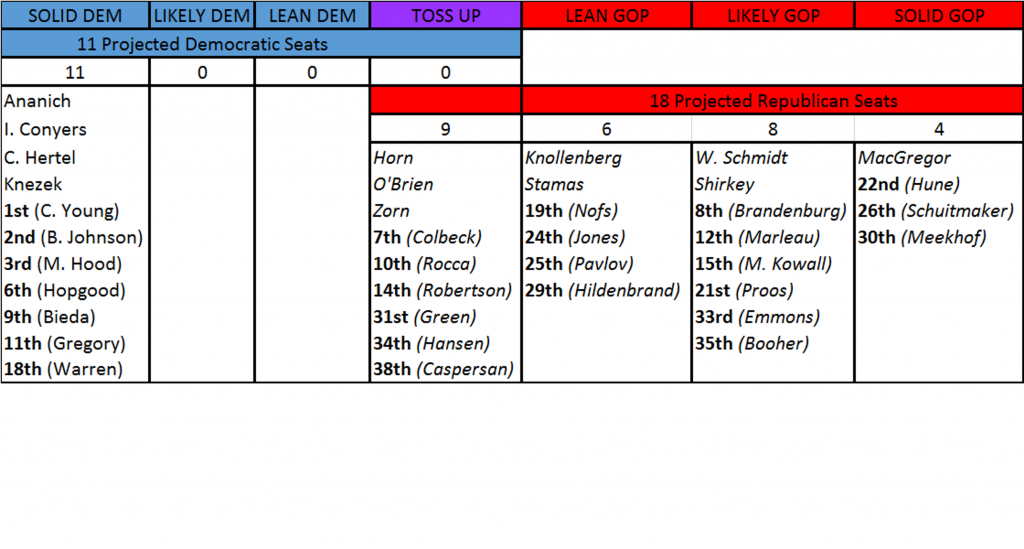