You are here: Home / Uncategorized / Rahm Emanuel: In Chicago, the Trains Actually Run on Time

CHICAGO — On Thursday, in the wake of a subway derailment and an epidemic of train delays, Gov. Andrew Cuomo of New York declared a state of emergency for the Metropolitan Transportation Authority, the busiest mass transit system in America. That same day, the nation’s third-busiest system — the Washington Metropolitan Area Transit Authority — handed out coupons for free coffee to riders stuck in the second year of slowdowns caused by repairs to prevent chronic fires.

Meanwhile, in Chicago, a recent survey found that 85 percent of passengers are satisfied with service on our transit system, the nation’s second most used.

The L, Chicago’s system, turned 125 this year. The elevated railway began as four wooden cars powered by coal and steam. Last year, more than 238 million rides were taken on the system, which, unlike the ones in New York and Washington, has not been troubled by systemic failures, breakdowns and delays. Even during a 28-day stretch of arctic temperatures in 2014, the L was never interrupted.

How have we done it? First, we put reliability ahead of expansion. We focused relentlessly on modernizing tracks, signals, switches, stations and cars before extending lines to new destinations. Unlike New York, which has spent billions to reach Hudson Yards, or Washington, which has concentrated on trying to reach Dulles Airport (both laudable projects), Chicago has improved the existing system. 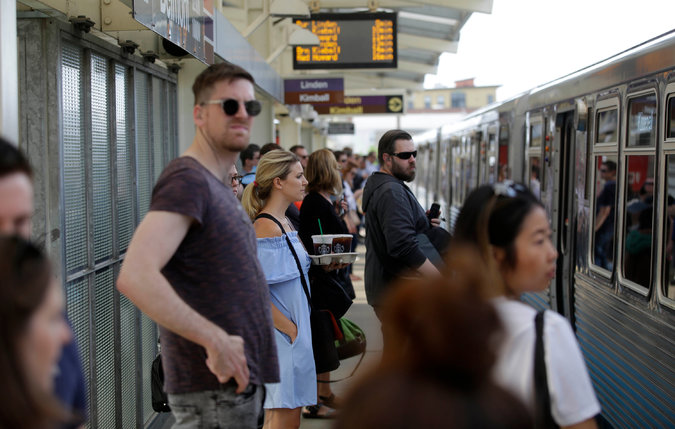 More than 238 million rides were taken on Chicago’s mass transit last year, which, unlike in New York’s subway, has not been troubled by systemic failures, breakdowns and delays.

Today, four of our seven rail lines are being completely rebuilt. By 2019, 40 stations will be reconstructed or brand new, and half of our tracks will be new. Chicago is the largest city in North America to offer 4G wireless throughout its system, and last month we broke ground on a factory that will manufacture the most modern fleet of rail cars in the country, the first cars to be built in Chicago since the historic Pullman factory closed in 1982.

When the L’s $8.5 billion modernization is complete, Chicago will be able to run about 15 more trains every hour on our busiest lines, cut 10 minutes off a trip from downtown to O’Hare Airport and have trains run as fast as 55 m.p.h.

Second, our management structure works. Chicago riders have closer contact with the person whose job it is to make the trains run on time: the mayor. In New York City, it is the governor in Albany. In Washington, it is an agency consisting of officials from the city, two states and the federal government.

While there is no one-size-fits-all model, I am confident local control is essential to Chicago’s transit success. It strengthens accountability, focuses priorities and ensures the people most directly affected by decisions have more of a voice in making those tough decisions.

But even though we’re doing our best, Chicago — like every municipal transit authority — needs federal support.

Chicago has modernized its system thanks in part to the Federal Transit Administration’s Core Capacity Improvement Program, which funds upgrades to existing corridors that are at or over capacity today, or will be in five years. Congress should double funding for the program to allow America’s busiest mass transit systems to meet rising demand. It should also expand the low-interest federal infrastructure loans that have helped Chicago to rebuild rail lines and airports, and to create the downtown Riverwalk.

And Washington should increase the portion of the Highway Trust Fund that supports mass transit to 25 percent, while also raising the gas tax by 10 cents. Yes, Americans would pay more at the pump, but it is a smarter alternative than the Trump administration’s privatization plan, under which we will all pay more in tolls and fees to the private investors who would own our roads and bridges.

Cities with reliable, modern mass transit are more economically competitive, have higher productivity, fewer carbon emissions and a better quality of life. And as we have seen in Chicago, mass transit not only connects people to opportunities, it also fuels growth. Modernizing our existing mass transit is one reason Chicago’s economy has expanded faster than the economies of New York and Washington, and faster than the national average for the last five years.

When Chicago’s elevated train first soared above the streets and between the skyscrapers 125 years ago, it captured the imagination of Americans and visitors from around the world who rode its wooden cars to the 1893 World’s Fair. It’s a lesson for us all: The only way to keep a city moving is to invest in its future.