Michigan’s two U.S. Senators — Democrats Debbie Stabenow and Gary Peters — have job ratings that are “above water,” meaning that more Michiganders approve of the job they’re doing than disapprove.

That’s the good news for the two solons. The bad news is that both Peters and Stabenow have job ratings that are in the “bottom half” of rankings of all of the nation’s 100 U.S. Senators. And Peters continues to suffer the ignominy of being the “least known” member of the Senate. After nearly three years in office, more than a third of Michiganders don’t even know who he is.

Heading into her 2018 re-election effort, Stabenow can claim 45% of Michiganders approve of the job she’s doing, with 36% disapproving and a fifth (19%) not even knowing who she is after 45 years of serving in elected office. For Peters, it’s even worse in terms of being “faceless” in the state he represents, Michigan — 37% approve of the job he’s doing, with 28% disapproving, but a whopping 35% have no idea who he is. No other U.S. Senator has an “unknown” factor as large as Peters.

Along with President Donald Trump’s declining support across the country, approval ratings for nearly all senators went down in their home states during the third quarter. The period overlapped with several unsuccessful Republican-led attempts to repeal the Affordable Care Act.

McConnell’s net approval, the difference in his approval and disapproval percentages, dropped 15 percentage points, the third-largest drop in the Senate, from the second quarter, according to the survey. The slide came as he failed to advance Obamacare repeal — a key pillar of the GOP’s political agenda since the law’s enactment in 2010. 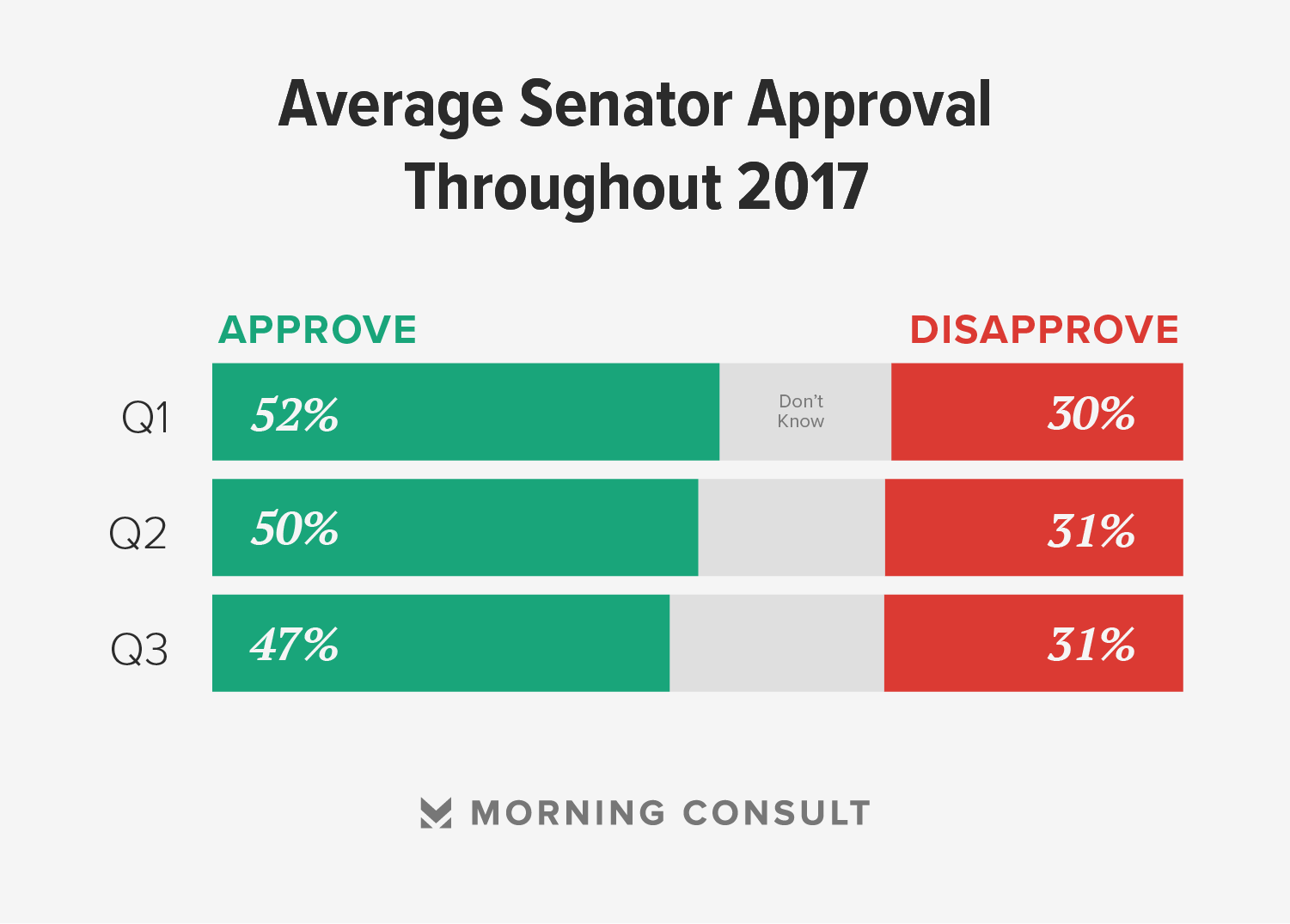 Since Morning Consult’s last release in July, West Virginians’ approval of Capito has fallen 8 points, from 56 percent to 48 percent, according to the survey. At the same time, her disapproval rose 10 points, from 26 percent to 36 percent.

Both senators would face voters again in 2020 if they choose to seek second, six-year terms.

Sen. Robert Menendez (D-N.J.) – who spent several weeks consumed by a federal corruption trial – joined the ranks of senators whose approval went underwater in the third quarter. In New Jersey, 32 percent of voters approve of his job performance, the lowest of any senator. Forty-one percent disapprove of him and 28 percent said they did not know or had no opinion of the senator, who has been in that office since January 2006.

Few senators saw improvement in their net approval rating outside the margins of error since the last survey was published in July. Sen. John McCain (R-Ariz.) broke that rule with a 6-percentage point increase in his net approval after being underwater in the second quarter of the year. The survey found 46 percent of Arizona voters approve of him and 44 percent of voters disapprove of him. McCain was the deciding vote against a Senate plan to repeal Obamacare and has been fighting cancer.

Related: How Voters View 2018’s Most Vulnerable Senators a Year Out

Sens. Tom Cotton (R-Ark.) and Jon Tester (D-Mont.) both saw their net approval increase by 9 percentage points. For Tester, who is up for re-election next year, that came from a 6-point drop in those who said they disapproved of him, to 33 percent, and a 3-percentage point spike in those who said they approved of him, to 53 percent — a change that is within Montana’s 4-point margin of error.

Another Democrat up for re-election in a state won by Trump last year, Sen. Claire McCaskill (D-Mo.), saw her approval fall 4 points, to 42 percent — but her disapproval hardly moved, ending the quarter at 39 percent after she participated in several August town hall-style events.