Lansing — Michigan Republicans are asking the U.S. Supreme Court to hit pause on a federal lawsuit alleging GOP gerrymandering, a move that could disrupt a settlement agreement announced Friday by Democratic Secretary of State Jocelyn Benson.

Benson’s deal with plaintiffs would require Michigan to redraw at least 11 state House districts. It would likely force a recalibration of an unknown number of surrounding districts as well.

But attorneys for Republican lawmakers are asking the nation’s highest court to intervene and delay any action in the suit until justices consider arguments in similar gerrymandering cases out of North Carolina and Maryland they are expected to take up in March.

“The Supreme Court will be ruling soon on the exact issues presented in this case, and this afternoon we asked the United States Supreme Court to stay this entire proceeding,” attorney Charlie Spies told The Detroit News by email.

The Michigan lawsuit alleges maps approved by the Republican-led Legislature in 2011 intentionally diluted the power of Democratic voters by “packing” or “cracking” them into specific districts.

The new districts would only apply for the 2020 elections. Voters last fall approved the creation of a citizen redistricting commission that will draw maps for 2022 and beyond.

As part of the deal with Benson, which would require approval by a three-judge panel overseeing the case, plaintiffs agreed to drop challenges to congressional and state Senate districts, along with four other state House Districts.

The 11 state House districts targeted in the agreement “represent some of the most egregious examples of the unconstitutional attempts by past legislators to draw legislative districts in an effort to rig the partisan outcomes of elections,” Benson told reporters at a Friday briefing.

Several neighboring districts would likely need to be redrawn as well, but “that’s going to be a question for the Legislature,” Benson said. 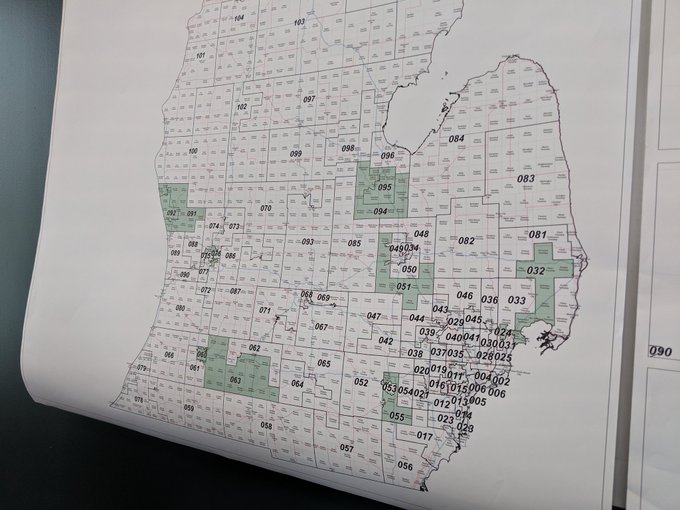 Districts in settlement proposal, in green here, are all south of Mt. Pleasant. So likely no changes needed to northern lower and UP

The Michigan gerrymandering case is currently scheduled to go to trial Feb. 5. In their application to the U.S. Supreme Court, GOP attorneys suggested federal judges are aware of settlement talks but made clear they do not plan to delay the trial for “any reason.”

Plaintiff attorneys submitted the proposed settlement Friday afternoon in the U.S. District Court for the Eastern District of Michigan.

“The next step is whether the court will accept it, and we’ll go from there,” Benson said.​​​​​​

The Detroit Democrat said she pushed plaintiffs to drop congressional and state Senate district challenges to minimize “upheaval.” But the deal still reflects her view that gerrymandering occurred in a way that violated the constitutional mandate of “one person, one vote.”

Benson has been the subject of considerable GOP scorn the past week after signaling her intent to settle the federal lawsuit brought by the League of Women Voters, a group of Democratic voters and attorney Mark Brewer, former chairman of the Michigan Democratic Party.

Michigan Republican Party spokesman Tony Zammit blasted the deal, saying Benson “has shown she cannot be impartial in this case, and therefore she must be replaced as it’s defendant.” Former Secretary of State Ruth Johnson, a Republican, had defended the GOP maps.

Benson denied partisan motivation for settling the case she inherited after taking office this month, suggesting she did not want to waste taxpayer resources fighting a case she believes the state would lose. The deal would give the Republican-led Legislature the first opportunity to redraw the state House lines, subject to judicial review.

“It does not matter to me who or what parties drew the districts,” Benson said. “What matters to me is whether they were drawn to circumvent the will of the voters.”

“The Democrats know it will be nearly impossible to redraw these 11 districts without affecting countless others causing electoral chaos,” Zammit said. “Worse yet, outdated 10-year-old data will be utilized to draw the new lines which will not accurately reflect the demographics of our state.”

The deal does not dictate how the Republican-led Legislature should redraw the state House districts, but it encourages them to do so in “transparent proceedings open to the public.”

The 11 targeted districts include two Republican-held seats in Metro Detroit, both in Macomb County, currently represented by Rep. Steve Marino of Harrison Township and Pamela Hornberger of Chesterfield Township.

None of the settlement districts are north of Mount Pleasant, meaning seats in the northern Lower Peninsula and Upper Peninsula where Republicans are dominant are unlikely to be affected.

The federal court would be responsible for establishing a deadline for the redrawn state House maps and determining how it would judge the partisan fairness of the proposed districts.

Republican lawmakers have denied overt political bias in the district boundaries they approved in 2011, but emails between map makers revealed in the federal case have included partisan references and commentary on the prospects of maintaining GOP power.

Benson told reporters she expected Republican opposition to the settlement despite its limited nature, which means state senators just elected to four-year terms would not need to run for re-election in 2020.

“I think no matter what decision I made in this case, someone was going to be upset, whether we went to trial or whether we settled or not,” she said.

Republicans have blasted Benson for connections to Brewer, the former state Democratic party chairman who donated $500 to her campaign and is a lead attorney for plaintiffs in the case.

Earlier this week, the Michigan GOP accused Benson and Brewer of trying to orchestrate “the greatest partisan power grab in Michigan history,” and attorneys for Republican lawmakers asked court permission to demand their communications donating back to 2017.

Benson noted she raised more than $1 million for her campaign and received donations from both Republicans and Democrats.

“If anyone giving me $500 can influence a decision I made when you raise that much money from thousands of people, then we’re in trouble,” she said. “And so that’s certainly not the case here.”

The settlement does not require any state payments to cover the cost of plaintiff attorneys but makes clear that the parties could agree to award fees at a later date.

“How much money are the taxpayers of Michigan going to be paying Mark Brewer’s law firm in this case?” Zammit said.