What damage will the loss of a deduction do to blue states with stiff taxes?

Do you live in a sinkhole state? There are eight of them, led by California and New York.

These are places where the population dependent on the state — for employment, welfare or a pension — is larger than the population feeding it. That excess of takers over makers is recipe enough for trouble when the next recession hits. But now some of the sinkholes have a new worry.

The Trump tax law enacted in December just about killed the federal deduction that prosperous people take for state income taxes. In states with stiff taxes, the cost of living has suddenly gone up.

Now high-income folks who pay the bills for big government in California, Illinois and New York will be even more motivated to decamp for Nevada, Florida or Texas. If they leave, a dwindling group of productive workers will be left to shoulder a rising financial burden.

Here are the eight states with sinkhole status: 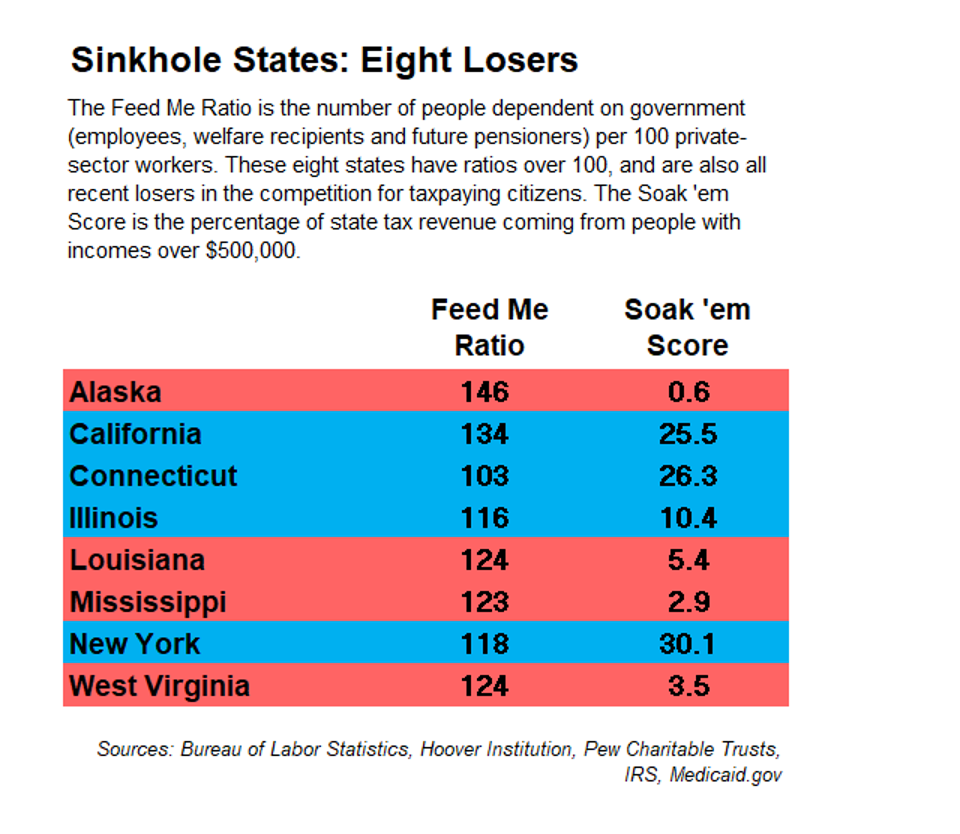 Sinkholes also have a Feed Me Ratio worse than 100. The ratio is the population of takers for every 100 makers. I define the taker count as the number of state and local government employees, plus the number of people on Medicaid or the Children’s Health Insurance Program, plus 1 for every $150,000 that state government pension plans are underwater.

The maker count is the sum of private-sector employment and federal employment. These are the people whose taxes pay the bills to keep the state government going.

There is, to be sure, some overlap between private employment and the welfare rolls, but the Feed Me Ratio is a fair measure, I think, of the balance between people who contribute to state and local government and people who draw from it.

Illinois is $361 billion in the hole on state pensions. (That figure doesn’t include Chicago’s $90 billion shortfall.) If Illinois asked workers in the private sector and the federal government to make up the state’s deficit, each maker would have to chip in $68,000. That monkey on the back helps explain why, in the income migration that the IRS is tracking, Illinois is a loser.

California is also an income loser. A friend of mine is a wealthy entrepreneur. He grew up in California, went to college there and started a business there. When the business became immensely profitable he moved most of it, and his residence, up the coast to Washington. 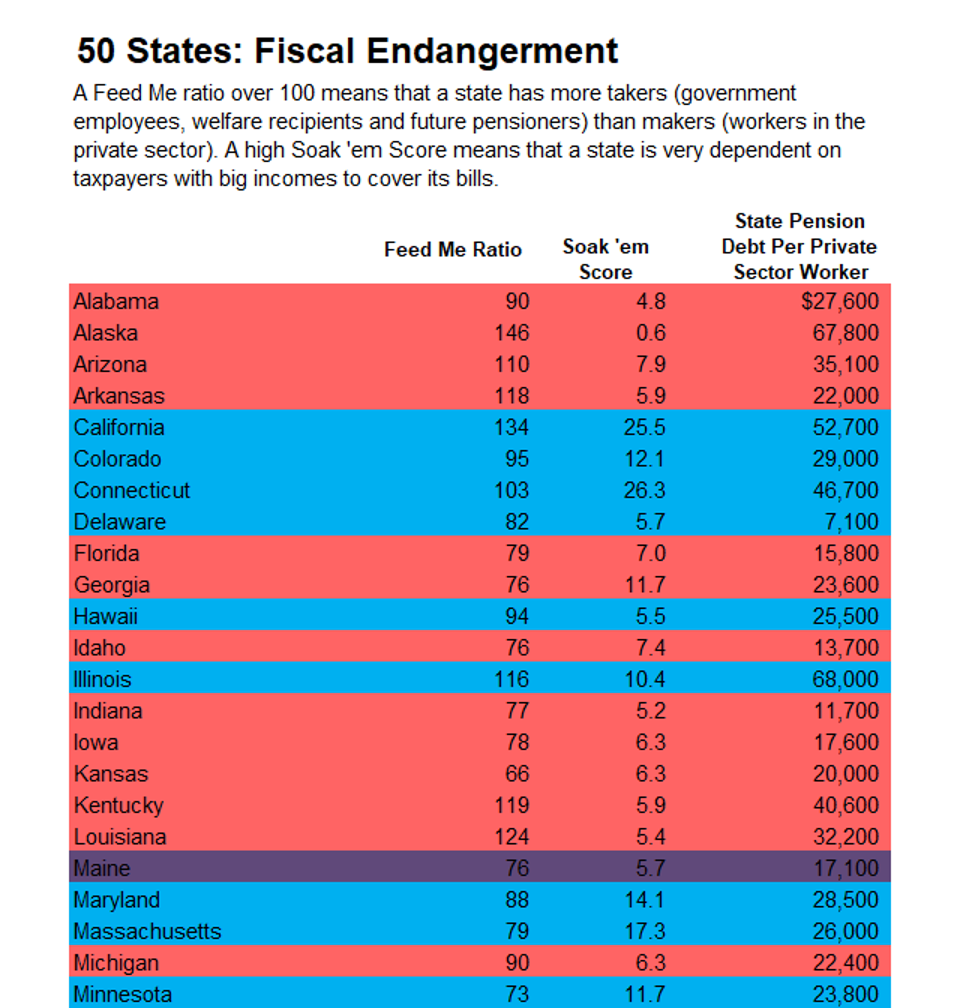 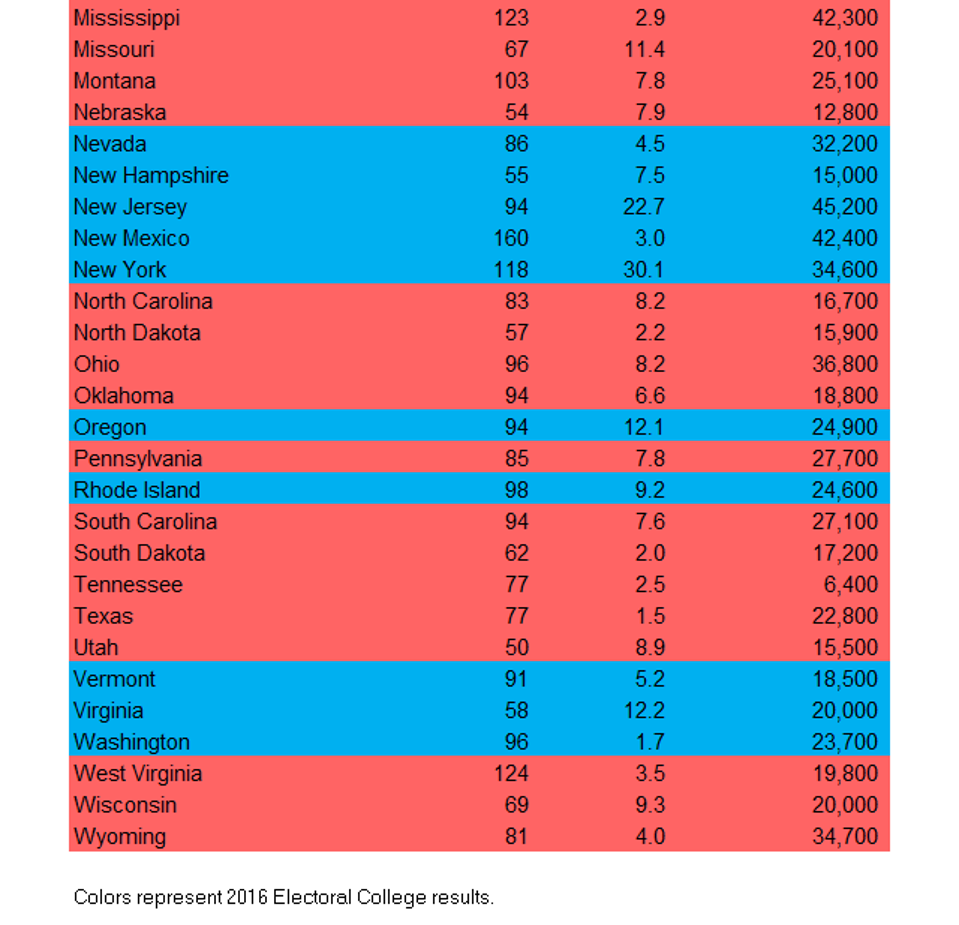 California, rich in sunshine and silicon, is still booming. But its taxpayer outflow, now just a trickle, could turn into a steady stream. California’s top income tax rate is 13.3%. For millionaires, that rate was blunted by the deduction they could claim on their federal returns. No more, with the deduction capped at $10,000. The harsh reality of the new tax law will sink in when 2018 tax returns are filed 15 months from now.

I’ve quantified the Trump tax problem in the tables as a Soak ’em Score. This is the percentage of state tax revenues (from all kinds of taxes) coming from income taxes on people with incomes over $500,000. That tax revenue is vulnerable. Not every high earner can relocate, but a lot can.

If you live in a sinkhole state, be wary of the home-state municipal bonds, even though they probably carry an exemption from your no-longer-deductible state tax. Also be wary of buying an expensive home. You may plan on departing for Florida as soon as the state gets into a financial bind. But bids on the house will come from people who know they’re moving into a sinkhole.

A note on the data: The Soak ’em Score uses 2015 tax returns. My estimate of the income tax that a state collects from high-income residents comes from the amounts those residents deducted as state and local income tax on their federal returns; it’s not a perfect match, because a New Yorker might be deducting taxes sent to Connecticut and vice versa, but it’s close. The state tax revenue figure I used for New York includes personal income taxes pocketed by New York City.

The migration data compares 2010 and 2011 returns, the latest for this series of IRS stats. Employment and Medicaid numbers are from October and November 2017.

Unfunded pension liabilities are the ones calculated by Joshua Rauh, a professor at Stanford’s business school and a fellow at the Hoover Institution. In discounting future payouts Rauh discards the wishful rates used by state actuaries. He uses the interest rates on U.S. Treasury bonds. That makes the deficits vastly bigger than what the states own up to.

Governor Jerry Brown says California is going to run a $6 billion surplus. It wouldn’t if he made a serious effort to pay down the $769 billion pension shortage.

As of 2011 the State of Washington, which doesn’t tax personal income, was attracting income earners from other states. I think it’s going to suck in more. Jeff Bezos, Bill Gates and my friend are onto something.