The Republican-led Legislature is expected to counter Gov. Gretchen Whitmer’s request for a 70-day extension of her emergency declaration with a resolution Tuesday that instead would extend the state of emergency through the end of April.

The resolution would not extend any of the executive orders but would prolong Whitmer’s authority to issue or amend those orders another 23 days, said Senate Majority Leader Mike Shirkey, R-Clarklake.

Such a move would extend the declaration until April 30, the same day that federal guidance on social distancing requirements is currently set to expire.

The Legislature is scheduled to meet Tuesday to consider the concurrent resolution in what is expected to be a unique session with protocols in place to prevent the spread of coronavirus.

“It will be safer than going to the grocery store,” Shirkey said.

“Every possible measure will be taken to minimize the risk of exposure to legislators and staff as they do what millions of other Michigan residents are doing every day and show up to perform an essential service,” House Speaker Lee Chatfield, R-Levering, said in a Saturday letter.

The Legislature’s plan to approve a shorter duration appears to be in conflict with the law, according to Whitmer’s office.The law allows the Legislature to either approve or disapprove the governor’s, said Whitmer’s spokeswoman Tiffany Brown.

“It does not authorize (the Legislature) to approve an extension for an amount different than the governor’s request,” Brown said.

The session will be the Legislature’s first since March 17 and the first held since the suspected COVID-19 March 29 death of State Rep. Isaac Robinson, D-Detroit, and the positive coronavirus result of State Rep. Tyrone Carter, D-Detroit, on March 22. Carter said he is feeling better.

Lawmakers will come in one or two at a time to check in during attendance before a voice vote is taken on the resolution. It’s likely few legislators will be on the floor during the vote to prevent the spread of the disease, Shirkey’s spokeswoman Amber McCann said.

In addition, anyone entering the state Capitol that day will have his or her temperature taken and be asked a series of screening questions by the Michigan State Police.

The process of approving the resolution will likely take a couple of hours, Shirkey said. 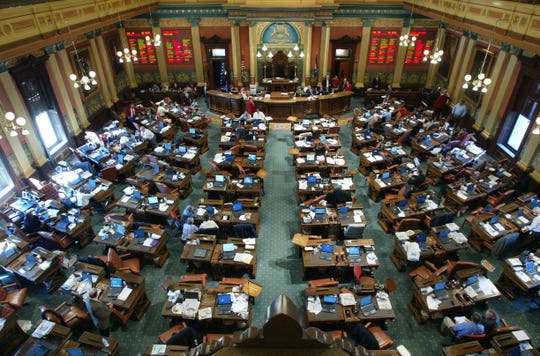 While the Senate can’t force members to stay away, the Senate will be “selective” in which members participate, Shirkey added, noting that some lawmakers live far away geographically and some have health problems.

Any lawmaker who was exposed to a person with COVID-19 or is feeling symptoms should stay home, Chatfield said in a Saturday letter to House Democratic Leader Christine Greig of Farmington Hills.

as they are doing in these difficult times,” Chatfield wrote. “Millions of Michiganders who are unaffected are showing up for work every day to keep our state moving.”

Whitmer requested Wednesday that the Legislature approve a concurrent resolution to extend the state of emergency by 70 days but dithered on whether lawmakers would need to meet by Tuesday to do so.

The Democratic governor urged legislators on Thursday morning to consider the resolution at a later date, but  Brown changed course later in the day and said lawmakers should come in Tuesday, “extend 70 days and return to their communities like the rest of us.”

Shirkey and Chatfield have opposed the full 70-day extension, arguing that they could approve a shorter timeline and meet again at a later date for any additional extensions that may be needed.

Residents deserve answers about delays in the unemployment system, better transparency regarding testing and the reach of the virus and a plan from the state to get “back to work” and “back to normal,” Chatfield said in the letter to Greig.

The abbreviated extension through the end of April will give Whitmer more time, but also give residents hope for a plan for the future “presented to them sooner than the end of June,” Chatfield said.

But Sen. Curtis Hertel, D-East Lansing, said he’s hoping “common sense will prevail” and lawmakers will extend the declaration for 70 days so they don’t have to come back in 23 days to cast another vote on the matter.

If the virus continues to spread, it could be more difficult to get a quorum so the Senate can act at that point, Hertel said.

“No one is talking about that at this point,” Hertel said. “There should not be the assumption that the governor is going to do anything that goes beyond what the doctors and scientists are telling her to do.”

Hertel pointed to a Friday Fox News interview with Sen. Peter Lucido, R-Shelby Township, in which the discussion focused on the idea of extending the stay-at-home order for 70 days.

“We’re not going to allow 70 days because it’s an arbitrary number,” Lucido said at one point, explaining that it should be looked at on a week-by-week basis.Greig urged against meeting without stringent protocols in place to mitigate the spread of the virus in a Saturday letter and criticized the idea that, if forced to meet Tuesday, the chambers would consider extending the state of emergency any fewer than 70 days.

“By approving the 70-day extension requested by the governor now, we would be providing the governor, doctors and nurses, and first responders with the tools they need to fight this virus while protecting members and staff from unnecessary risk,” Greig said.

It’s a matter of debate whether Whitmer’s emergency powers would expire Tuesday without legislative action. The governor’s office maintains they won’t.

Under the Emergency Management Act of 1976 cited in Whitmer’s state of emergency, the governor’s authority to issue executive orders remains intact for 28 days unless a requested extension is approved by the Legislature through concurrent resolution.

Issued March 10, the 28-day timeline for Whitmer’s initial state of emergency expires Tuesday without legislative approval of an extension.

But Whitmer issued Wednesday a new order expanding the initial state of emergency and declared a state of disaster for the first time. The state of disaster also carries a 28-day shelf life, said Steven Liedel, former chief legal counsel for Democratic Gov. Jennifer Granholm, who served from 2003-2010.

The Wednesday order “declared a new emergency, taking into account what we now know about the breadth of this crisis, and also for the first time declared a state of disaster,” Brown said. “The law is clear that these declarations last for 28 days before they need extension by the legislature.”

Even if the governor’s timeline wasn’t extended under the declaration of disaster, there is another law cited in Whitmer’s emergency declaration that does not include a sunset.

The combination of the two could leave the Legislature hamstrung if GOP lawmakers attempted to buck the governor’s authority, Liedel said.

“She’s asking them to do the right thing and she has determined given her duties that the state of disaster should be extended 70 days,” he said. “They don’t get to play games and say we think it’s this deadline or not.”

While the governor has “multiple sources of independent power” in a time of emergency, the Emergency Management Act of 1976 includes “special liability protections” for health care workers that the Emergency Powers of the Governor Act of 1945 does not, Brown said.

“These first responders deserve the confidence that they will be protected for the duration of this crisis when they take the actions we need them to take,” Brown said.

In order to extend a state of emergency, the Emergency Management Act requires a concurrent resolution from the Legislature upon requests from the governor for “a specific number of days,” Greig said.

In that sense, the Legislature can approve or disapprove the request but not modify it, both Whitmer’s office and Greig argued.

“…you are embarking upon an unprecedented course of action that is inconsistent with the text of the Emergency Management Act and past precedent in the Michigan Legislature,” Greig wrote in her Saturday letter.

Chatfield pushed back on the idea that Whitmer’s Wednesday expansion constituted a 28-day extension and rebuffed Greig’s position that the Legislature could not modify the approved extension.

“Your interpretation results in an obvious absurdity — that any governor could just revise and reissue declarations in perpetuity, rendering the clear language of the law and the legislative branch meaningless,” Chatfield wrote in a response to Greig’s Saturday letter. “The idea that the Legislature cannot determine the length of an extension is also inaccurate, without precedent and contrary to both state law and logic.”

References to both the 1976 and 1945 laws in the orders appears to be a “belt and suspenders approach,” said Republican former Lt. Gov. Brian Calley.

But Calley argued the Wednesday order from Whitmer wasn’t so much an effort to lengthen the emergency declaration as it was to expand the scope of Michigan’s emergency. The expansion allowed Whitmer on Thursday to issue her order closing K-12 schools and forgiving missed instruction, an order that went beyond the limited public health concerns of the March 10 declaration.

“The scope of the disaster had to be expanded in order for the governor to make the decision on education without going through the process of amending the law in a more traditional way,” said Calley, who is now president of the Small Business Association of Michigan.

Since the GOP-controlled Legislature is working with the governor to reach a compromise extension of the emergency declaration, some legislative observers expressed hope the legal limits of the declaration won’t need to be tested.

Still, the Legislature’s understanding is that the governor’s emergency declaration under the Emergency Management Act would end Tuesday, Shirkey spokeswoman McCann said.

“I hate to say it’s a bit of an academic debate, but that’s what it might come down to,” McCann said. “(The governor’s office) asked it of the Legislature, so they’ve implied they also feel they need approval and so that’s what we’re operating under.”