You are here: Home / Uncategorized / Can State House Dems Break Through?

Between 2010 and 2016, for the first time in Michigan history three out of four straight general elections for the state House of Representatives wound up with exactly the same 63R/47D split. Only in 2012, when Republicans managed only 59 seats and the Democrats climbed to 51, was there anything different.

That means that Republican Gov. Rick Snyder continues to live a charmed political life — by the time he leaves office, Snyder’s party will have controlled both legislative chambers for all eight years of his tenure. That’s the first time any governor, or successive governors, has enjoyed such a partisan lock since the GOP ran the table beginning in World War I and extending to 1932.

Next year, Democrats face the same challenge they faced last fall — how to net-gain the nine seats they need to get into the majority for the first time since 2009-10. Needless to say, every political soothsayer in Michigan was sure Dems would gain at least a few state House seats last fall, even if they didn’t achieve the majority. They astounded everyone by failing once again. They did pick up one open seat that had been held by term-limited Republican Pat Somerville in the 23rd district, but they unexpectedly lost the neighboring 17th when incumbent Bill LaVoy (D-Monroe) was upset, meaning they netted nothing overall.

So, what about next year? Everything seems to hinge on how well the nation absorbs the impact of a Donald Trump presidency, not to mention what things look like at the top of the 2018 Michigan ticket with an open-seat race for the governorship, not to mention U.S. Senator Debbie Stabenow’s re-election bid.

On paper, Democrats had a much better chance to make gains last year than they will in 2018, because most of the open seats in 2016 were held by term-limited Republicans. Next year, it’s the other way around.

However, we can’t be sure how many House members of both parties may decide to give up their current seats prematurely to run for open seats in the State Senate, where 26 members will be term-limited. A hefty 43 new members (27 Republicans, 16 Dems) were elected to the state House last fall, but 2018 looks like a “light turnover’ year — as of now, only 25 members (14 Democrats, 11 Republicans) out of a total of 110 are term-limited. That could change by the filing deadline in the spring of 2018.

Below is an up-to-date table broadly summarizing election prospects next year in all 110 state House districts, by incumbent or otherwise.

This is how things look if the general election were held today, without knowing who all the candidates will be. In most cases, “solid” or “likely” or “lean” refers to the district itself, although in a few cases a particularly strong incumbent or dominant party candidate (or, conversely, a weak one on the other side) enhances his (or her) party’s chances of winning the seat.

A district number in boldface rather than a name means that the sitting member can’t run again because of term limits (the incumbent’s name follows in parentheses). Democrats are in regular type, Republicans are in italics: 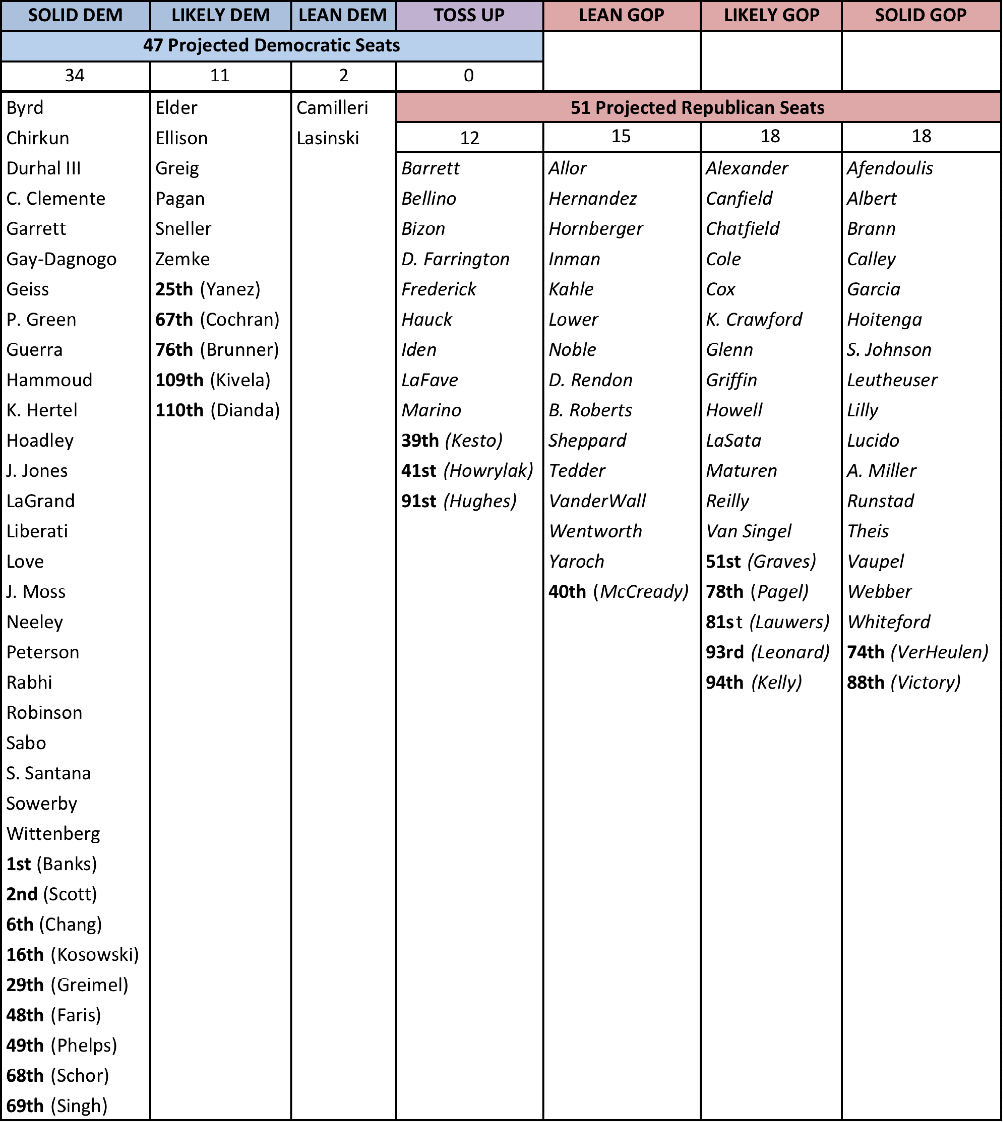 Thank you for visiting! You have let us know that what we produce about Michigan politics and government matters to you. More people than ever are reading and listening to what we put on our news site, and this year’s election activity will be especially momentous. Your support makes all the difference.